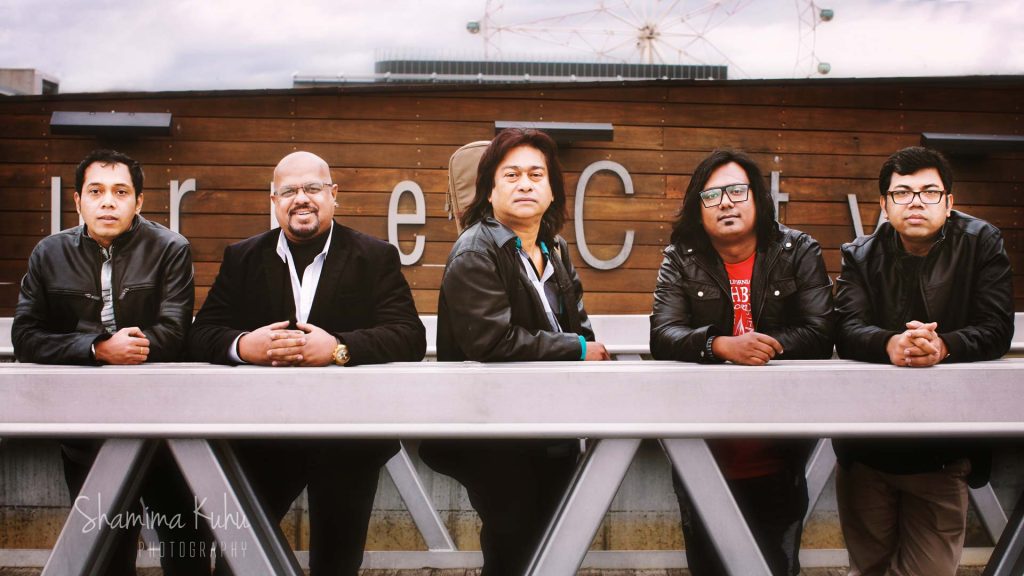 Souls is one of the most popular and oldest band in Bangladesh. Souls started its journey in from 1972. Their first lineup consisted of Sazed Ul Alam and Lulu on guitars, Newaz on percussion, Ronny on drums, and Tajul on vocals. Towards the end of 1973, founder member Lulu left the band before Nakib Khan joined the band. His induction into the band was followed by his brother Pilu Khan and Tapan Choudhury. In 1982, Nasim Ali Khan and Ayub Bachchu joined. The band started writing and composing their own songs while performing cover songs of western bands in hotels. In 1982, they released their debut album, Super Souls, which was one of the first albums released by a music group in Bangladesh, along with the debut album of the band Shocking Blue. The album features the song “Mon Shudhu Mon Chuyeche”. The Kumar Bishwajit song “Torey Putuler Moto Kore Shajiye” is a Souls track from their debut album. Abdullah Al Mamoon wrote the lyrics of this song, “Mukhorito Jibon” and “Voole Gecho Tumi” of the same album. In 1985, they released their second album, Colleger Er Corridorey, which features the songs “College Er Corridorey”, “Forrest Hill Er”, “Football”, “Khujish Jaharey”, and “Paharer AkaBaka”. After the release of their second album, Nakib Khan and Pilu khan left the band, and later formed the band Renaissance. In 1986, a reconfigured Souls released their third album, Manush Matir Kacha Kachi, which contains the songs “Eitoh Ekhane Brishti Bheja”, “Ek Jhaak Paakhi”, and “Muthor Bhetor Poddo”. In 1988, they released their fourth album, East and West, which had six English and six Bengali songs. Even though they had started their career singing English songs, this was the first time they released them. The songs were all written and composed by the band. Afterwards, Ayub Bachchu left Souls to form Little River Band, which was later renamed Love Runs Blind and is also known by its acronym, LRB. In 1993, Souls released their fifth album, E Emon Porichoy, which was Tapan Chowdhury’s last appearance in Souls. Afterwards, he left the band to pursue a solo career. Chowdhury was replaced by Partho Borua as the lead singer. In 1995, Souls released their sixth album, Aj Din Katuk Gaane, which features popular songs “Keno Ei Nisshongota”, sung by Partho, and “Bestota” and “Chaa-er Cup-e,” sung by Naseem Ali. In 1997, Souls released their seventh album, Oshomoyer Gaan which features the songs “Oshomoyer Gaan”, “Ami Ar Bhabbo Na”, and “Oi Dure Neel”. In 2000, they released their first acoustic album, Mukhorito Jibon; it compiled some previously released songs, some remakes of old Indian Bengali songs, and some newly released songs. “Sharadin Tomay Behbe”, “Bashi Shune Ar”, and “Mukhorito Jibon” were some of the more widely played tracks from the album. In 2003 and 2004 respectively, they released their ninth and tenth albums, Tarar Uthan and To-Let. To-Let was the last album that sound engineer Mobin worked on before his death in a highway accident in Bangladesh. Jhut-Jhamela was released in 2006. Their most recent album is Jam, which was released in 2011.